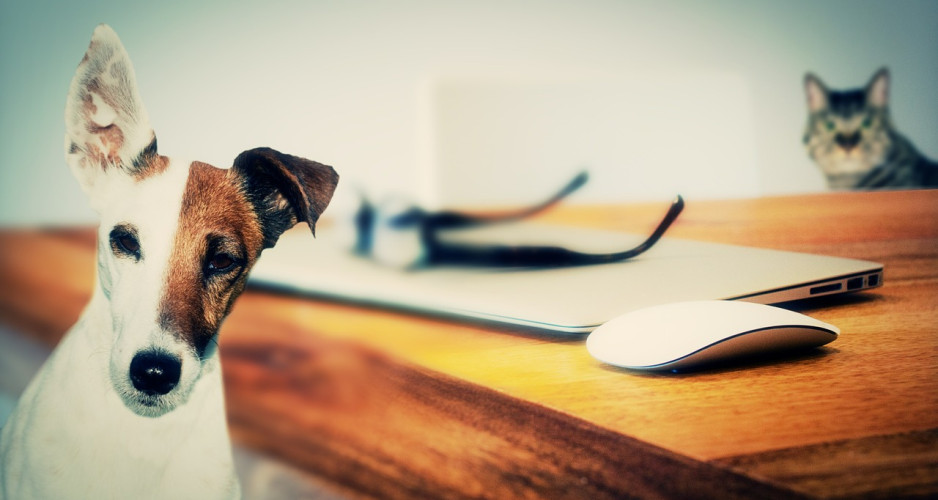 Okay, first thing’s first: Cats AREN’T dogs. I can’t tell you how many people have affirmed that cats are snobby and rude and don’t show affection towards humans like their beloved canines do. These people obviously aren’t familiar with cats and simply don’t know the facts! People constantly try to compare cat behavior to dog behavior, and this cat vs. dog mentality is rather absurd if you really think about it… These are two completely different species we’re talking about here. Although your cat may not come running up to you with a bone in his mouth, wagging his tail, it doesn’t mean he doesn’t love you!

It’s as simple as this: Cats communicate and show affection in their own unique ways. You may not even realize it, but your cat is sending off signals to communicate with you all of the time. To help you de-code your cat’s love language, check out the top 10 common ways cats communicate and display their affection towards humans: 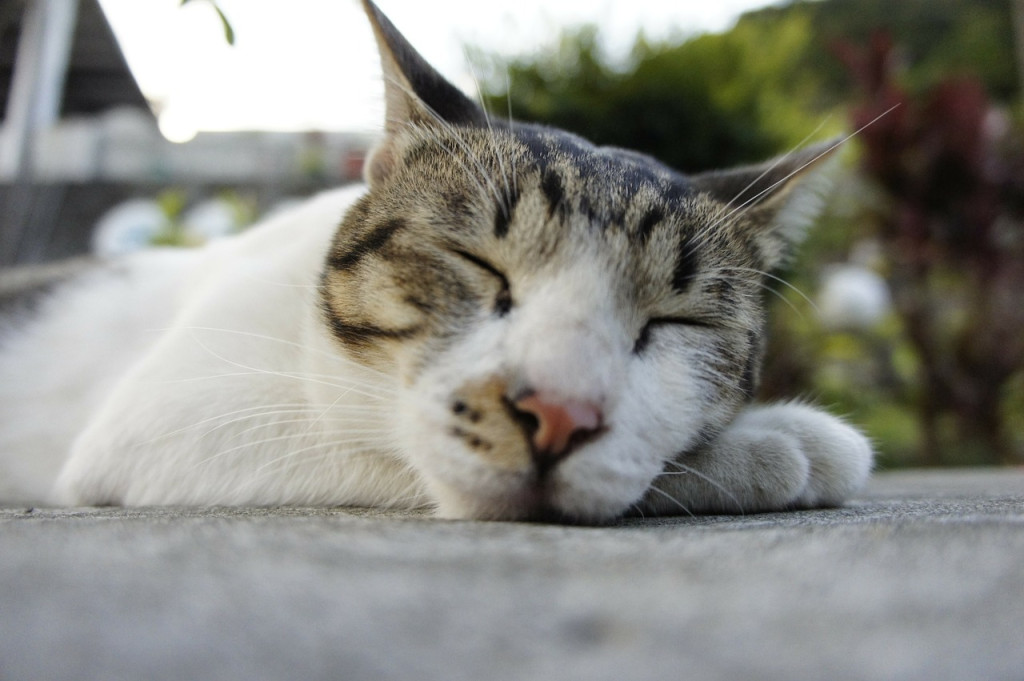 A quintessential happy cat is one that is purring, and this portrayal is a pretty accurate one. However, the act of purring is a bit more complicated as cats not only purr when they’re happy but also when they’re sick, hurt, or scared. I know, very confusing!

Many biologists and cat behaviorists hypothesize that cats can use purring as a technique to self-soothe in stressful situations and dangerous environments. Some scientists theorize that cats use their purr as a mechanism to soothe potential predators and reduce the risk of being attacked.

To further complicate things, purring is also thought to exude healing capabilities for cats as the frequency of the purr may help to accelerate the repair of broken bones and torn ligaments.

With all of that being said, the consensus among cat experts primarily attributes the purr to cats being relaxed and content. The moral of the story is that if your cat is sleeping on your lap purring, he is a happy cat and his purr says it all! 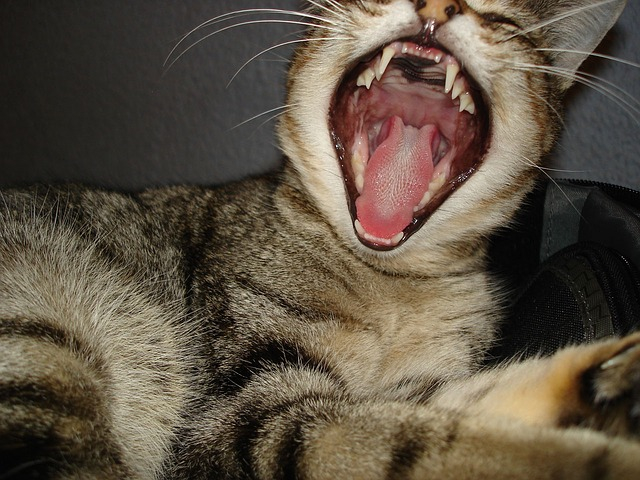 How do cats get the attention of humans? You guessed it, one of the most common ways cats communicate with humans is by the act of meowing.

The origin of the meow is rather elusive, and some evolutionary biologists believe that cats evolved to meow in order to communicate with humans. We won’t delve into that theory now, but a cat’s meow is complex and can mean a lot of different things. But to start off simple, the “mew” or little chirp they often let out when their owners enter the room is thought to be their way of greeting us.

The meow cannot just be interpreted by just the noise itself. A cat’s body language as well as understanding the context of the situation is critical when trying to interpret what your cat is saying to you.

For example, if your cat meows, arches his back, and rubs up against your legs when you walk in the room, chances are he wants your attention and welcomes physical contact. Alternatively, if your cat lets out a long shrieking meow when you touch him, it probably means he doesn’t want to be touched.

Missing these types of cues from your cat can be common, especially if you’re a new cat parent or don’t own a cat. Of course, a hiss or growl is a little easier to interpret, but much of cat-to-human communication is significantly more subtle.

In addition to a cat’s vocalization, eye shape, ear position, tail motion, and posture are all great indicators of mood and what your cat may be trying to tell you, so pay attention! 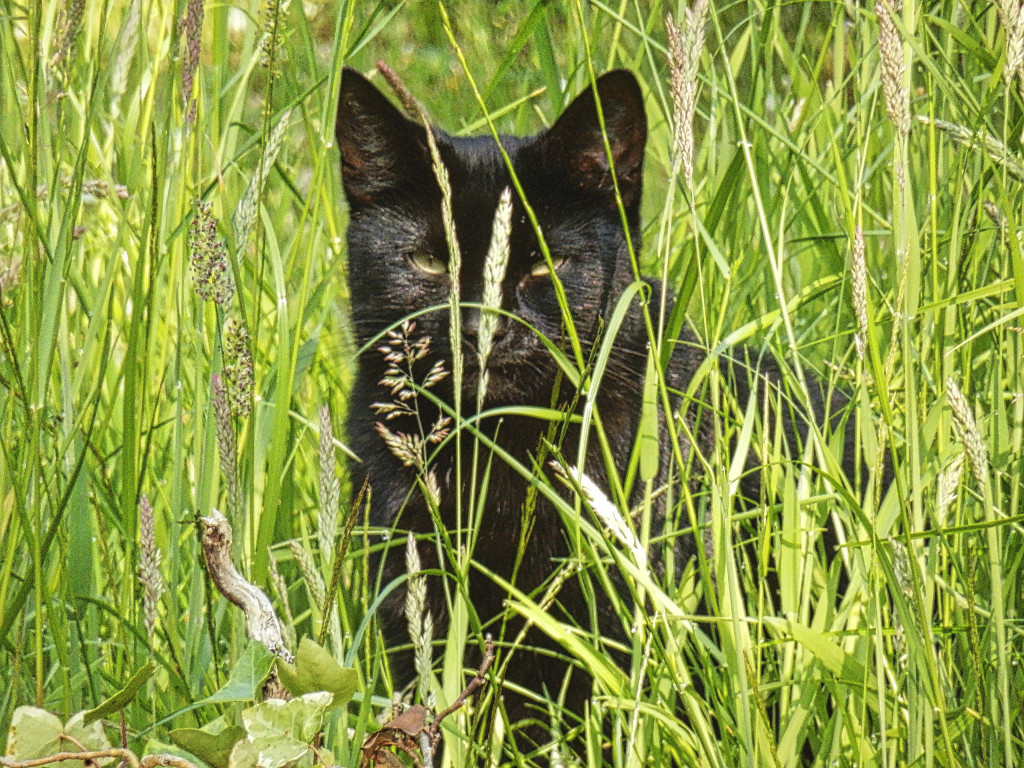 One common cue cats often give off when they’re happy and displaying affection towards humans is something that can essentially only be described as, well, a glare or the infamous stink eye.

When your cat squints his eyes at you, don’t worry, he’s not mad at you. This stink eye look your cat is shooting your way is actually an affectionate display your cat may use to convey that he is relaxed and comfortable with you. You can shoot a glare right back at him if you want to return the gesture as many cat behaviorists suggest that your cat is capable of receiving your message! 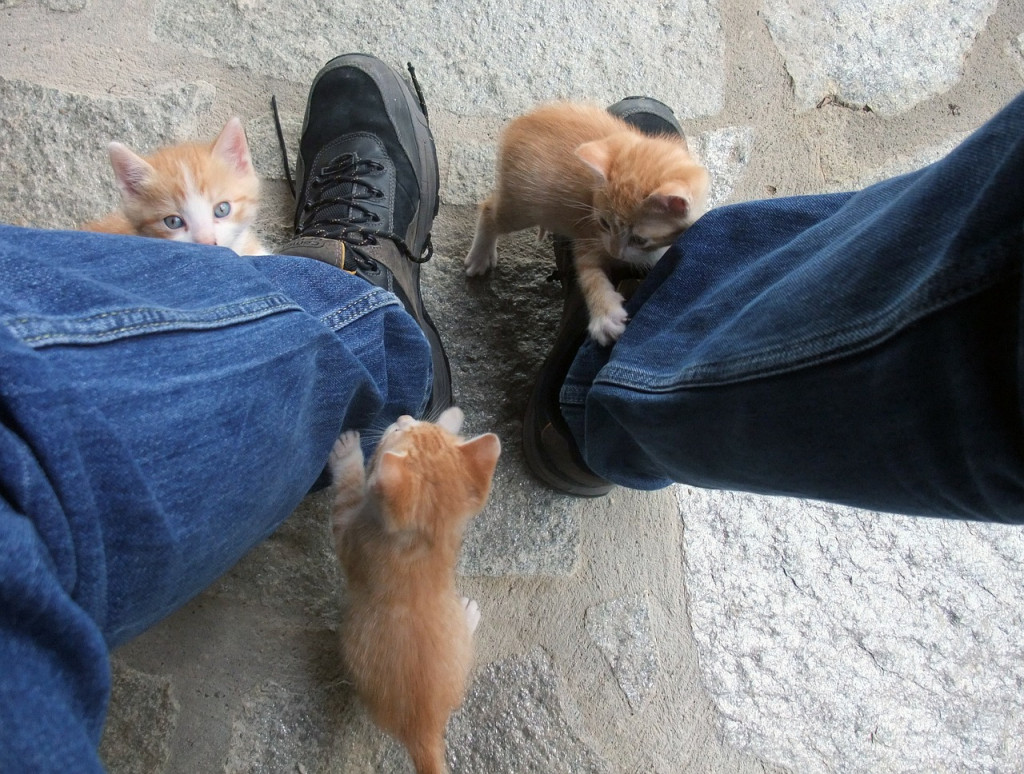 Cats are always rubbing up on things and people, and it’s common for cat haters to describe this as creepy. Well shame on them, this is a huge part of a cat’s love language. No, cats aren’t trying to taunt you with their squirmy ways.

Cats have scent glands along their cheeks, and the pheromones (scent chemicals) located along the cheek and on cats’ heads are associated with nothing but positive vibes—affection, comfort, friendliness, and familiarity. Cats commonly rub up on their owners when they feel comfortable, and their rubbing also means that you are a friendly, familiar face to them, so embrace the rub!

5. No, your cat isn’t trying to claw your brains out 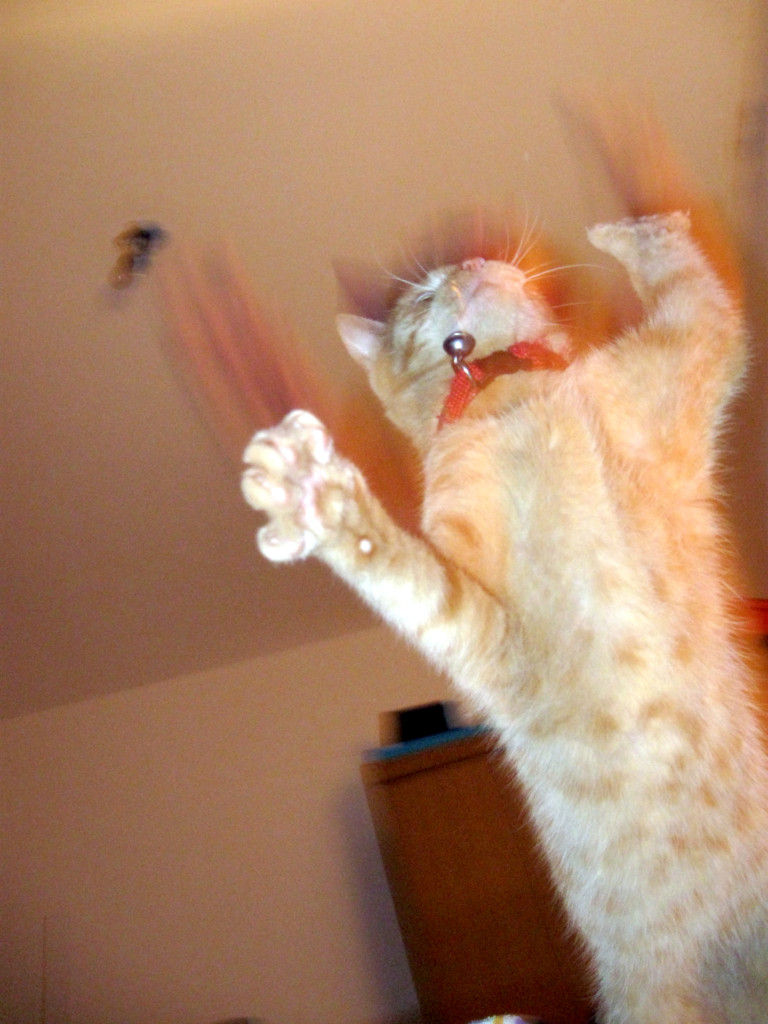 Has a cat ever come up to you and begun kneading his little paws (and claws) into you? Many people chalk this up to cats being jerks, but oh contraire; this flexing and relaxing of the front paws against soft objects, a.k.a the milk tread, is thought to have originated from the technique kittens use to stimulate the release of milk from their mother’s teat during nursing.

It’s extremely common for adult cats to maintain this kneading behavior when they feel happy, relaxed, and comfortable with you. The moral of this story is to suck it up because when you think your cat is clawing your guts out, it’s really an act of love!

6. No, your cat isn’t being a jerk and trying to head butt you

Ever been standing around and a cat comes up and head butts you? No, this isn’t the beginning of a bad joke. This actually happens all of the time. Even if you’ve got a cat on your lap, he may bunt his head against your face, neck, or head. Sound familiar?

Cats have scent glands on their face, so head bunting is a pretty popular move in the feline social scene. Cats not only bunt their heads against their human companions, but they also do the same with their cat pals.

Head bunting is not just about exchanging scents for cats, it’s the ultimate form of PDA! Get a room next time, ehh?! 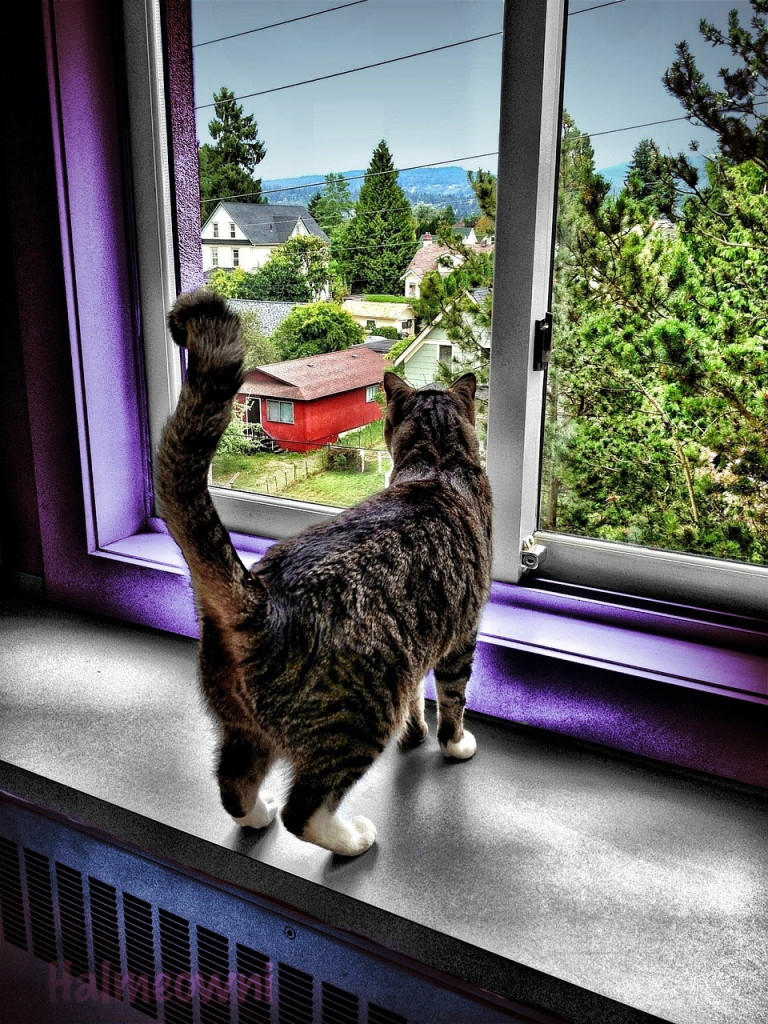 You know what they say… A cat’s tail is the window to his soul. Well actually, I don’t think anybody says that, but the way a cat moves his tail is very telling about how he feels.

For example, when cats move their tails from side to side in a rapid motion, it basically means stay the f*ck away because they’re highly irritated. Essentially the complete opposite of what it means when a dog does this. See, I told you: Don’t compare cats to dogs!

Anyway, when cats hold their cute little tails up high in the sky with a hooked end, this typically means they’re feeling happy, secure, and confident. That’s right, like they’re strutting their stuff on the catwalk. See what I did there?

What’s another classic cat tail move, you ask? Well, most cats will also give the tip of their tail a little flick as a greeting when they see you. Isn’t that cute?! 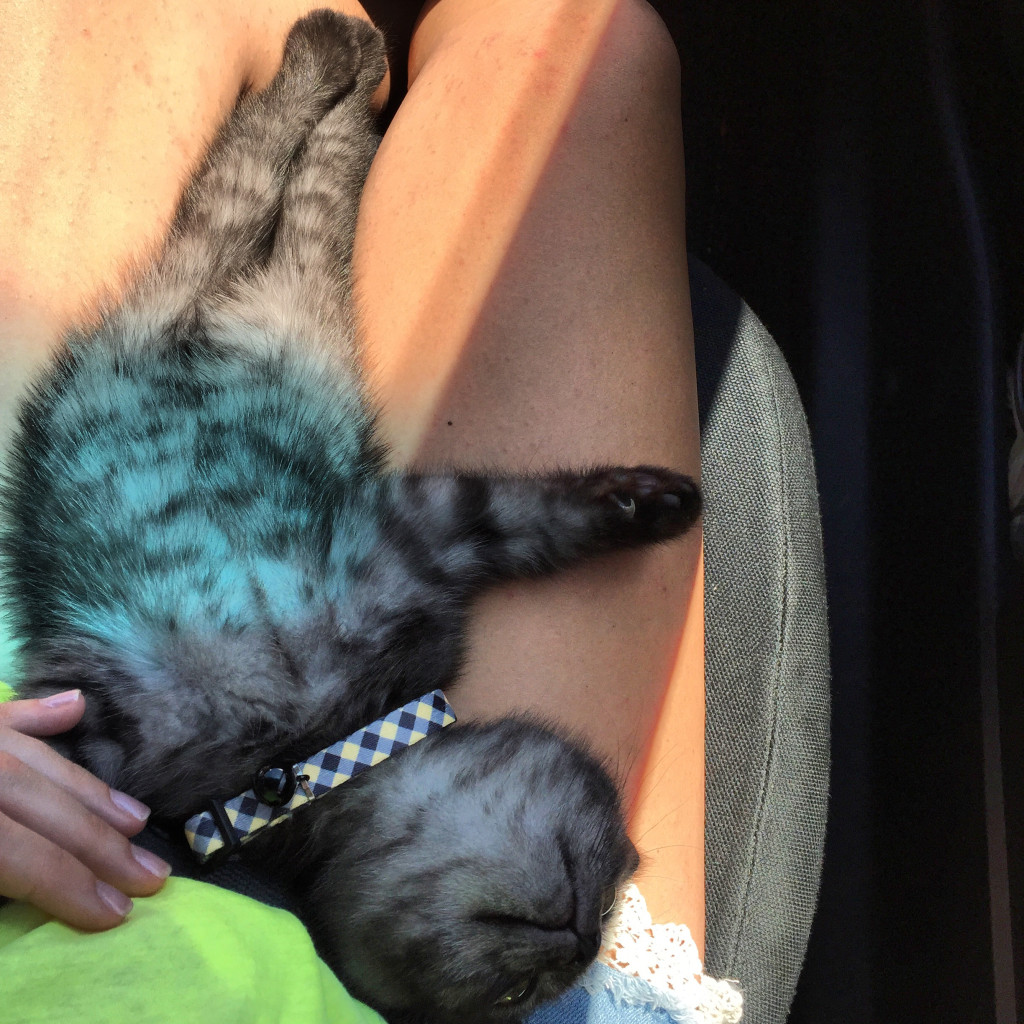 Do you ever look at your cat all stretched out on the floor in a bizarre position and think how weird he is? Or maybe, how lazy he is? Actually, you probably take a pic and Instagram that sh*t first, then you think that, right?

When a cat is slothing out in the middle of your kitchen floor during the peak of your rocking dinner party, tummy exposed with all four limbs spread out like a starfish, it’s not just because he’s gangster (well it is), but it’s also because he feels completely comfortable around you. So pat yourself on the back, you’ve been a great cat parent. And, you probably have a ton of Instagram followers.

But seriously, for a cat to lounge out leaving his limbs, tummy, or tail totally exposed, it’s a big deal. This is the ultimate message that your cat feels very secure near you as well as in his environment. 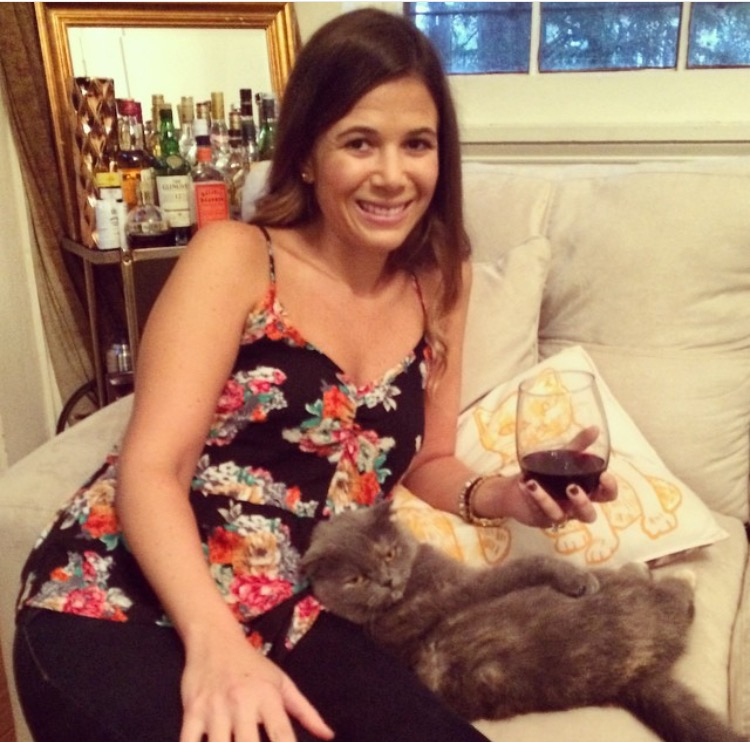 Don’t get your feelings hurt if your cat doesn’t do this, but if your cat hops up on your lap, sits next to you, lies on top of you, or leans against you, take it as a serious cat compliment.

When a cat wants to be in close physical contact with you, read between the lines my crazy cat people: He HEARTS you! Whatever you’re doing, you cat whisperer you, keep it up! And if you and your cat aren’t on that level yet, don’t worry, that’s what The Perfect Cat is here for. Stay tuned my friend, stay tuned.

10. No, there hasn’t been a nuclear attack… it’s a gift from your cat 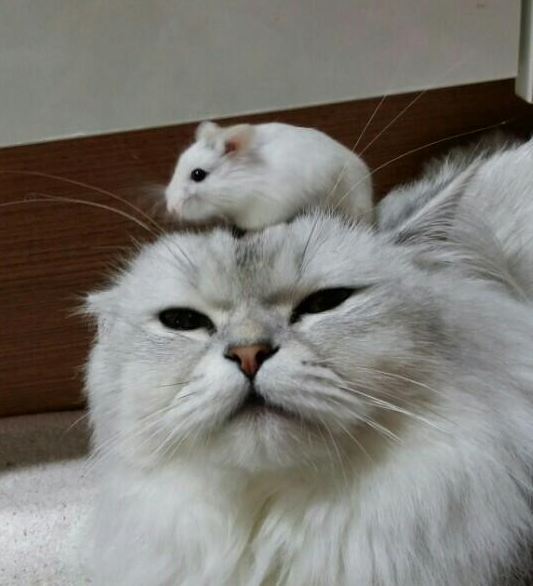 We’ve all been there. Or at least you’ve probably heard of this. And if not, I’m not a sicko, this is actually a thing– Sometimes cats kill small rodents, birds, or other little creatures, mutilate them, and then leave them at your door step. Nice, right?

This is one of those catisms that give cats a bad rap. People always say how cruel and disgusting this is. How can the big, mean cat kill the cute little bird, they ask. Well next time your cat does leaves a treat at your door step and haters hate, ask them: When’s the last time your dog bought you a gift, loser? Okay, maybe you don’t have to call the loser a loser. They are just ignorant and need a little enlightening.

Before your cat became the rock star that he is today, his ancestors were doing all sorts of crazy things that would surprise you in order to survive. Although cats were domesticated 10,000 years ago, they’ve retained quite a few of these survival skills, including their rad abilities to hunt and survive off of stuff other than Fancy Feast…that’s right, raw meat.

In the wild, cat moms—calm down crazy cat lady, REAL cat moms—taught their babies how to eat their food by bringing home dead or injured prey. Domestic cats today are no different. The problem is, in the modern day of spayed cats, many female kitties have no little kittens to pass on their hunting hacks to.

This is where you come in. By bringing you a dead mouse à la carte, your cat is just getting in touch with his roots and acting the way he would in the wild. He recognizes you as his family. Awww, isn’t that sweet? And to be honest, he can’t really visualize you catching a scrumptious mouse in that Ann Taylor pants suit.